I never told many people about this but, last year I got pretty anxious for a while about the informal way that personal data had becoming readily available through social networking sites such as Facebook, LinkedIn and Twitter.  This was reinforced to me when rich clients such as TweetDeck and Fishbowl started coming out and I could see the real power of the API’s of these sites in full view.  Even more when I decided to go and take a peek at the API’s that Facebook makes available to developers and started to understand that I might be sharing personal information about my relationships or my location without even being fully aware who I was giving it to.

I remember at the time being able to completely visualize what sort of tools the bad guys would be capable of creating if they really put their minds to it.  Not to belittle the efforts of the people who wrote TweetDeck and Fishbowl, but it’s really getting easy to build very rich dashboards to represent social graphs and with a little additional logic, I could see that you could pivot around on this data in some really interesting ways.

Fast forward 8 or 9 months and the game just keeps getting a whole lot more interesting with people such as Twitter allowing applications to store the geolocation along with the other bits of the tweeted data.  This technical shift opens the door for new innovations to rise up in how we visualize information based on the location when it was being created.  The following image shows a picture of Bing’s new Twitter Map tool: 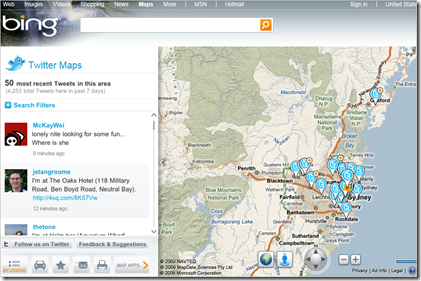 As you can see from this picture, I can see location-based tweets over time (past 7 days) and then I can use filters to isolate certain data (e.g.: view only tweets made by a single user).  Couple that with tools like the new Silverlight 4 Client for Facebook and you start to understand how much intelligence you could build around this stuff:

Couple that with the potential reach that you get across a social graph from deploying Facebook applications and you could build a very interesting, location based “listener”.  Pictures, events, places, comments, and times.

OK, so that’s enough paranoia, let’s look at what I think needs to happen to balance the scales a bit.  We know that technology can be a terrific aid in helping to uphold safety, just as it can be used for bad stuff.  Here is a link to the text from Steve Ballmer’s recent speech at the Worldwide Public Safety Symposium.

In and of itself, Bing Twitter Maps is not massively useful right now.  For example a relatively minor number people are producing geo-coded tweets and so what you see when you look at this tool is a demonstration of capability.  But think about how useful tools such as this could be in a crisis sometime in the not too distant future.  A tool such as this could help somebody who was in distress to get a message out.  It could be used to monitor activity near the scene of a crime – such as a burglary – and it could help groups of people who are often in disparate locations to understand when they were located near other members of the group.

For some of these types of scenarios to play out, I believe that we need more metadata so that different classes of information could be visualized in better ways.  Consider what could be done if there was a metadata standard for Twitter which was the equivalent of a 911 or emergency message.  Metadata such as this would allow individuals to send out distress signals and to perhaps have them acted upon.

Similarly, what if there was the ability for certain agencies to annotate their data with certain information which carried special weight with regards to public interest?  Fire departments or local councils could start to create messages which plugged in to the raft of tools that are starting to emerge.  Imagine a social network dashboard which was able to interrupt you with an important announcement about an event which was occurring nearby to you.

I think that as more standards start to emerge in the way that these types of information are transmitted, we will start to see some really amazing experiences being built and some which carry tremendous social responsibility messages to us.

Until that day arrives, maybe we will be dazzled by new rich renditions of information, but whether it has great application in our lives might be debatable.  With the current tools the way they are, I think that there’s more on offer for petty stalkers than there is for seriously digital communities, groups, and individuals.

Posted by Darren Neimke at 3:54 AM